Riya Blackstone’s life has been relatively normal and quiet. She lives with her father at Blackstone Manor and has been home schooled her entire life. Why her father suddenly wishes her to take college classes at The Academy is beyond her, but she complies because she senses he is worried that she has become odd—so she likes dead things, big deal!— and in need of real friends who are not in his employ. Little does she know that a reunion with a young man who abandoned her ten years ago, a single lecture from the future King, and a chance encounter with a undead boy would change the course of her entire life, unlocking secrets that have been kept from her for years. These events force her to realize that she is not “normal” after all. In fact, she may not even be human. [Final cover and blurb TBD] 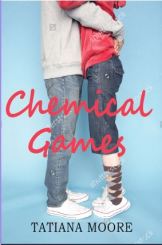 When Kaylie Jacob, a pretty science nerd, meets Isaiah Clark, a star athlete and a genius, sparks fly. When Isaiah learns that Kaylie doesn’t like jocks, he hides who he really is. Can he keep his secret without hurting her?

First published in 2007 on FictionPress. To be edited/revised soon for official publication. Final cover and blurb TBD.

AROUND THE WORLD TONIGHT, 2015

Maxine Merryweather has never been one to wish upon stars. There’s no logic in wishing and dreaming. Everything she’s accomplished is a result of hard work and stringent testing and evaluation. As a neurologist, Max has ordered her life based on these principles. So, when her Hollywood producer sister asks her to be a part of the next mega hit TV show, Around the World Tonight, as the nanny to the star’s new ward, Max agrees, which makes no logical sense. Nannies pretend. Nannies play. There is no pretending and playing in science.

Edward Dunn never really wanted to be on a reality dating show. It started as a joke by his late sister. Now as the new guardian of his six-year-old nephew who is suffering in unimaginable ways, his priorities have shifted to father mode. Unfortunately, there seems to be no way out of a Merryweather Production contract and he has no choice but to trust that the nanny is as capable as promised, and hope that he can survive the drama of thirteen women vying for his love. There’s only one problem. After meeting her, Edward is unable to get the nanny out of his head, and soon she has captivated every part of him.

Max cannot deny her attraction to Edward, but has made it very clear that she is not a part of the show. What she feels is certainly not love. Besides, what is love beyond illogical firings of the brain’s synapses? But… there is something about him that makes the music in her pulse and spin, allowing her to momentarily shut down all logical reasoning to wonder if perhaps the path to happiness involves a little wishing after all. 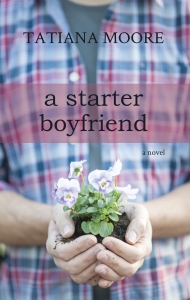 The duty of a starter boyfriend is not to fall in love.

Zoe Rayne is happy. She has made a name for herself at work, has found peace and acceptance of her body, and has become a role model for Paige, a girl she was paired with in the Big Sister, Little Sister program. According to those around her, the only thing wrong is that she’s single and has been for a long time. Zoe is determined to stand by her belief that a man isn’t needed to complete one’s life, especially not one manipulated into dating her.

When Colton Philips is presented with the starter boyfriend contract, he doesn’t think much of it. As he sees it, the agreement and his growing landscape design business are just the distractions he needs while he waits for his ex-fiancée to return and marry him. Why not help his sister’s friend in the meantime? Never mind that it’s been two years since Cara left him at the altar to run away to Paris with their dog.

For both Zoe and Colton, the contract is just one big, laughable joke. Colton’s in it for the distraction and Zoe is determined to prove that there’s nothing missing from her current life. Neither can deny the attraction between them, but is Colton in a place to accept new love, and will Zoe be able to step out of her comfort zone?

Available at Amazon, Barnes and Nobel, and Smashwords.

Daisy Harper is through with Adam Hood. They are officially broken up, which means no more funny business. She’s doing a great job of ignoring him—or so she convinces herself.

But all it takes to bring her reserves crashing down is one little question: May I kiss you?

When warned by her best friend not to sleep with him on the eve of a blood-red sun, Daisy fully intends to heed this advice. But when it comes to Adam, she’s never had much self control. One kiss is all it takes for them both to come undone.

Sexy, demanding, and passionate, Adam wants her desperately. She feels the same for him, but can’t bring herself to say the three little words he wants to hear. Because of this, he’s the one to call it quits, and this time he’s not playing around.

Daisy knows she belongs with Adam. She can blame losing him on the omen of the blood-red sun all she wants, but the truth is that she’s clutched in fear that the past will certainly repeat itself if she says “I love you.” Three words that she desperately wants to say.

One of these things is just not like the others.

In two months, Estela will be married to the love of her life. She doesn’t have a dress, a venue, or invitations, but she’s positive things will work themselves out. Between planning her wedding and managing Moo’s career, she finds it hard to focus, and the knowledge that she’s killed someone—violently—is pretty distracting.

She’s promised Caleb not to get involved in another murder investigation, but what if she’s the murderer? Certainly she should get involved then? At least to turn herself in? But then things get crazy and models are being offed left and right. With Moo a little over seven months pregnant, she could already be next on the killer’s list! Estela knows she has to intervene somehow.

Protect Moo. Marry Caleb. She can do these two things at once, can’t she?

Determined, Estela hurries to conclude this murder business. Just as things start to get back to normal, she sees a side of Caleb that she never expected in a million years. It is a side that makes her question everything. Does she even know him? Does she know herself? Maybe there won’t be a wedding after all.

Moo is getting married, and Estela has vowed to do everything she can to give her best friend the perfect wedding.

After surviving a stalker and a serial killer, she’s sure she can face just about anything. Even Paulina Hart, Moo’s overbearing, controlling, and evil mother, who has sunk her Momzilla talons into the wedding details and is shredding everything!

Focusing only on Moo also pushes Estela’s other relationships, including the details of her own wedding, to the backburner. When things start falling apart at the seams, Estela realizes that she has to do something to mend the cracks in her life before she loses not only Moo, but Caleb too. 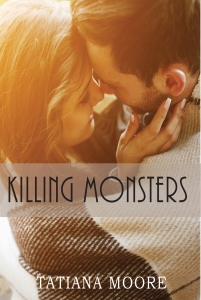 If you have black, demon-like eyes, you must be a serial killer, so says Estela Ramos who just survived the overwhelming experience of being stalked and terrorized by a man declaring his undying love. She knew Dr. Pervo was creepy from the start and is now positive that she can identify a murderer just by looking at him.

When several young women connected to Christian Waller, the fiancé of her friend Olive, are murdered, Estela is certain that Christian’s the culprit and that Olive, pregnant with his triplets, may be the next victim. Estela just has to prove it, which is hard when no one takes her seriously.

Given the choice to either have track down and bust a serial killer or have sex with her boyfriend, Estela would rather butt in to an FBI investigation. Although she’s madly in love with Caleb and has fun trying, she just can’t bring herself to seal the deal, and, quite frankly, feels a bit deformed. Why take a chance at another failed tryst in the sheets—or hay—when there is a serial killer afoot? 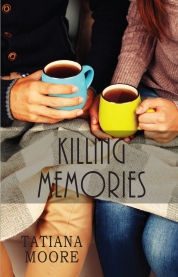 Estela Ramos knows she will die a lonely virgin spinster with donut glaze on her face. She’s resigned herself to this fate, but the women in her life have other plans. Soon, there are two men standing before her: the first is a desperate gynecologist with personal space issues, and the second is a handsome high-fashion photographer who claims that they’ve known each other for years.

Estela becomes easily lost in the steady gaze of the photographer’s jade-green eyes, but knows she won’t get anywhere if she can’t forget the pains from her past and truly believe that someone would be eager to love her just as she is. Revised: 9/6/2015

Available as ebooks at Amazon, Barnes and Noble, and Smashwords. Available in paperback from CreateSpace. Check out the reviews at amazon.com and amazon.co.uk!

One thought on “Books”